Or call us at:

Hi Prabitha, would you like to tell us a little bit about your background?

Sure. I was born and raised in Coimbatore, India and moved to Chennai a few years back. I started my career at Oracle, where I worked primarily as a CRM consultant. I later continued my focus on CRM consulting at IBM and then to Capgemini. For the longest time, I found myself balancing life at home with my aspirations to climb the corporate ladder. I spent the bulk of my time there working with CRM and ERP, learning the ins-and-outs of management and administration. That’s essentially the summary of my professional life up until I joined CUBE84.

That’s an impressive resume. How was everything on the personal front at the time?

At IBM, I found the work-life balance to be excellent, as the company was extremely flexible. I enjoyed cooking and baking in particular, and explored the idea of being a food critic. After a while, I was about to have my first baby and so, had to make some important decisions, both on the personal, as well as the professional front.When I went through maternity, and realized that I wanted to give it my all. Balancing work life with raising a newborn was very hard. I gave it a shot, but ultimately, maternity took a large toll on me. At the time, I gave up any notion of having a career and thought I was going to be a full-time, stay-at-home mother.

” Following a four year maternity break, I wasn’t sure if I could go back to a large company...or whether they would even want me...employers are hesitant to take a chance on someone who’s been out of the game for so long, and they start to question your priorities. So much so that you become much more reserved in how you interact with people. “

Is that when you decided to apply to CUBE84?

Yes! Following a four year maternity break, I wasn’t sure if I could go back to a large company...or whether they would even want me. When you go on a hiatus like that, you tend to lose confidence...and it’s not just you. Employers are hesitant to take a chance on someone who’s been out of the game for so long, and they start to question your priorities. So much so that you become much more reserved in how you interact with people. CUBE84 was one of the few places that didn’t see my maternity break as a weakness. They also allowed me to work from home as and when needed. They understood that coming back to the office would take some time, and encouraged me to take baby steps rather than throwing me straight into the fire, so to speak. Once they eased me into the company and saw what I could do, I began to work in a much more independent and hands-off kind of role.

So, how did all these paths lead to CUBE84? What were your initial impressions?

Before coming into CUBE84, my primary goal was to learn Salesforce. I looked at small companies with good training programmes, and heard of CUBE84 through my network, with no inkling that I would end up being here for this long. After the recruitment process, which was fairly straightforward, I began undergoing training. I didn’t expect to be a part of such an intimate team, didn’t foresee myself growing attached to my colleagues and most importantly and had no idea that I would enjoy working on projects as much as I do. I was eased into CUBE84, but found every step of the process beneficial, particularly as I was coming off a long break. So yeah...I would say that most of my preconceived notions were shattered within a few weeks at CUBE84.

Your background involved working at large-scale corporations and MNCs like Oracle and IBM. How was the transition process compared to your previous experiences?

Coming from a larger organization, I immediately felt that my work was more meaningful and had a greater impact on the growth of the company. A lot of my experiences from places like IBM did translate to my responsibilities at CUBE84, but I learnt almost immediately that, at a small firm, my work manifested in a much more tangible and visible way. I saw the differences I made, heard from the voices I’d helped and most importantly, found myself falling in love with the process of ideating, working with clients and helping them meet their goals.

Thank you for sharing your story! On a final note, do you have any advice for candidates applying to CUBE84?

Before, I’d always been someone who thought and possibly over thought before taking on challenges. I’d question myself, those around me and sometimes, the idea itself, rather than meet the challenge head on. After coming to CUBE84, I was inspired by many of my colleagues, who had overcome far greater obstacles and weren’t afraid of making mistakes..so yeah, that would be the most important piece of advice I have to candidates looking at CUBE84 - Don’t sell yourself short and don’t be afraid to make mistakes. Apply yourself and don’t question your capabilities, because that’s the kind of mindset that makes you adaptable, versatile and effective in both horizontal, as well as vertical growth. 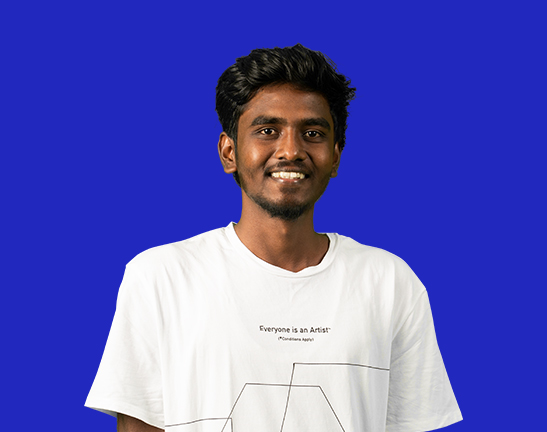 Q&A with Manikandan A: Salesforce Trainee 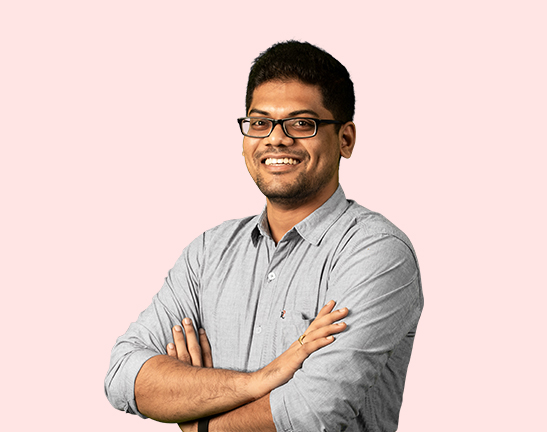